Today, I was invited to give a guest lecture for the class CS224N: Natural Language Processing with Deep Learning. I was excited. First, I’d never given a lecture to such a big audience before – there are 400+ students in the class. Second, it’s Richard Socher‘s class. He’s hands down one of the most chill professors I know. For some reason, he always looks like he’s just got out of bed and we occasionally catch him biking down the stairs to the classroom. Third, I’d always heard that speaking at NVIDIA Auditorium is lit and I want to try it out before graduating.

I arrived at the lecture room today feeling slightly nervous. Only slightly because I was confident about the materials — I’ve practiced it a few times teaching it in my own class. I saw a couple of familiar faces in the room and immediately put their names on the list of motivated people I know. Why put on proper pants and go to a lecture when you can watch it from home?

A nice technician helped me set up and I thought: “wut, this class has a technician? nobody helps me set up for my class.” He explained all the buttons to me (my usual room has no button), showed me the tiny screen on which I can see how the recorded lecture would look like, and a microphone. I started feeling nervous. I was taking comfort in the fact that I had a soft voice so most people wouldn’t be able to detect stupid things I say. But a microphone would change everything.

When I teach my class, I’d space down, engage with the students, make jokes. I feel like they know me and would have a higher tolerance for me. But I found it hard to do in this guest lecture. I didn’t quite know how the students would react.

Anyhow, I finished my lecture with no major mishap that I was aware of. I kept saying GPA when I wanted to say GPU but that’s a mistake anybody could have made. The students were nice and attentive. There was a guy in the second row that napped from the beginning to the end. I understand. He’s probably a CS major. A guy in the first row nodded to everything I said, and another guy in the third row furiously jotted everything down in his notebook.

I’m not quite sure if they were listening to what I was saying, but their physical feedback was very encouraging. I made a mental note to be more physically engaging in classes I take in the future in case that’d help the person teaching.

I felt pretty good after the lecture. I did something new, learned some lessons, and hopefully helped some students in the process. Gabe later sent me a screenshot he took while watching my lecture online. He didn’t attend the class to show support. *friends* 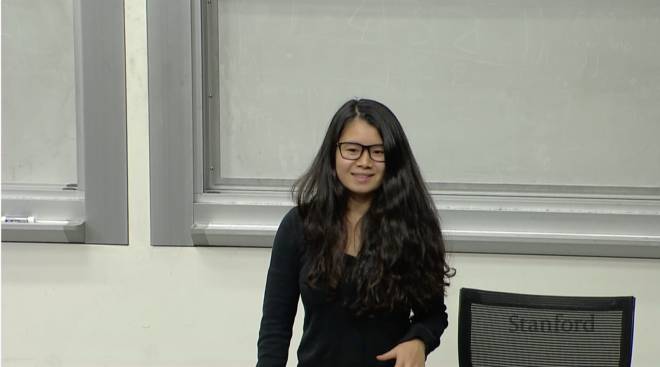